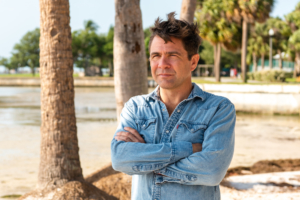 I’ve had the good fortune to enjoy great snook (Centropomus undecimalus) fishing in my home state of Texas, where I worked as a fishing guide for many years. I’ve also enjoyed Florida’s world-class snook fishery along the Gulf and Atlantic coasts. As an angler and Executive Director of the American Water Security Project (AWSP), I’m pleased that on Wednesday, June 30, the Florida Fish & Wildlife Conservation Commission (FWC) will host a one-day workshop on the future of this incredibly popular, biologically fascinating, and extremely valuable tropical fish species.

Warm-water-loving common snook historically occurred in the U.S. along Florida’s southern coasts and along the southern reaches of eastern Texas. Florida’s increasing population and coastal development, resulting land-based sources of pollution, coupled with a changing climate are threatening the habitats that support essential habitats for this species. With these issues in mind, anglers and scientists are hoping that FWC presents more holistic fisheries management strategies that include sustaining habitats that are critical to maintaining strong snook populations.

If you judge snook fishery management by traditional measures, the species is well-managed. Managers maintain population reproduction rates by setting spawning potential ratio (SPR) targets at relatively high levels. The SPR of the population is adequately set so that theoretically enough sexually mature snook are left to breed to keep the population at stable levels.

Seasonal closures are another important tool to maintain a healthy reproductive population. A summertime closure protects spawning adults, while the winter closure protects fish vulnerable to cold weather while guarding against overfishing.

Managers also restrict the harvest of snook to a “slot limit.” Snook are protandrous hermaphrodites—they change sex (male to female), and they tend to change sexes at specific lengths. The slot limit is designed to allow enough of the large female snook to survive, ensuring successful spawning. In Florida, that slot is set so that anglers can keep one fish between 28 to 32 inches along the Atlantic Coast, and 28 to 33 inches on the Gulf Coast, when seasons are open.

Because of climate change, snook now inhabit wider latitudinal ranges. Rising temperatures allow the species to expand their northerly range into what were cooler temperate waters along the northeastern and northwestern coasts of Florida and central Texas coast. Recreational snook fisheries have expanded into areas as far north as the Florida Panhandle, and to Galveston Bay in Texas. So have essential snook habitats, namely red mangroves, which are tropical trees also migrating north thanks to rising global temperatures and warming trends in local waters. Expanding habitats and fisheries may seem like good news for fishermen, but there are tradeoffs.

For example, in Florida’s Big Bend area, where seagrasses and salt marshes still dominate the coastline, mangroves may displace these temperate coastal habitats, and snook may out-compete other popular species such as spotted seatrout (Cynoscion nebulosa). Snook, with their gaping jaws and ability to vacuum prey into their mouths, are more adroit feeders than sea trout, and will dine on small trout as well. Snook populations may increase in these areas at the expense of other important species.

But competition for habitat and forage between fish stocks may be less insignificant factors compared to abrupt weather events resulting from a warming climate.

Because global climate temperature trends are rising sharply, weather patterns, such as EL Nino/ La Ninas events are more extreme. Climate change doesn’t follow a linear succession of warming weather year in and year out. For example, this past winter’s historic freeze event that famously exposed the weaknesses of Texas’ power grid also resulted in significant fish kills in coastal waters of the western Gulf of Mexico. Periodic hard freezes, as well as wetter and more powerful hurricanes, heavily impact wildlife populations and their habitats, especially  at the fringes of their range distribution. Those threats aren’t yet factored well enough into snook management throughout expanding ranges.

Traditional fisheries management has relied upon a perspective that under static conditions,  harvests of fisheries stocks should be managed directly as a function of adult reproductive output and recruitment into the fishery. However, abrupt weather, climate and environmental change are variables that confound the models supporting traditional stock assessments. Especially as vulnerable juveniles, snook depend upon threatened inshore coastal habitats, primarily brackish creeks with complex vegetation such as Spartina grass marshes and mangroves. Development is directly paving over these habitats. These habitats are also being insidiously degraded by land-based sources of pollution such as stormwater runoff carrying sediments and fertilizer and human wastewater spills or leakage from aging and degraded infrastructure and septic tanks.

For example, more intense rainfall events and rising seas flood septic tank drainfields, cause fertilizers to run off into coastal waters, and overwhelm wastewater treatment and collection systems. Yet historically, managers only passively implicated the impacts of habitat and water quality on fisheries populations, when in fact essential habitat is disappearing as water quality declines, resulting in seagrass loss and toxic harmful algal blooms.

More worrisome – none, repeat none, of the habitat and water quality decline problems are included in snook management strategies. While FWC biologists study the importance of snook habitats, information on habitat availability is not incorporated into management of these populations. If snook populations are to survive our changing environment and habitat conditions, this management paradigm must change. Managing fisheries stocks with traditional stock assessment methods will fail as declining water quality destroys habitats essential for productivity of healthy snook populations.

The American Water Security Project will be represented at the Snook Symposium, and we will make these points among others. The future of the Fishing Capital of the World depends upon modernizing fisheries management to include calculations for habitat loss, and more importantly, sustaining water quality and essential fish habitat throughout the snook’s expanding ranges. Check back later this week for a report on the Symposium.