Many Florida utilities rely on aging sewage systems that have not been upgraded in some cases since the 1950s. Florida’s fragile ecosystems and economies should not be threatened by the inevitable spills and breakdowns that occur in these systems. Florida should to take a comprehensive and a forward-looking approach to upgrading Florida’s domestic wastewater infrastructures.

Few of Florida’s systems have the capacity to handle existing responsibilities much less address Florida’s rapid population growth and development. Obviously, dumping raw sewage into vulnerable ecosystems such as the Indian River Lagoon or Tampa Bay is not the answer, nor is passing off nutrient-laden, partially treated sewage as irrigation water. Perhaps must unacceptable is the way Miami/Dade and Broward counties dump partially treated sewage offshore via discharge pipes onto dying coral reefs. Instead, wastewater should be viewed as a resource that, with reasonable investments, can be cleansed sufficiently and reused responsibly. We have the technologies and the means to implement them. 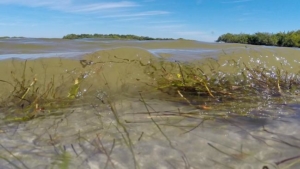 Sea grass in a small wave at Mosquito Lagoon after an outbreak of brown algae turned the Indian River and Mosquito Lagoon east of Orlando into a muddy-looking mess in 2016. (Red Huber / Orlando Sentinel)

In order to protect and improve Florida waters, and to ensure adequate water supplies in a rapidly growing state, we must look beyond the costs to individual municipalities and their utilities and consider the threats that Florida’s aging sewage systems now pose to the integrity of our tourism- and real estate-based economies. Florida’s water woes have made national headlines. It’s going to take years to clean up our beaches, waters and fisheries, as well as our reputation as a great place to live and visit. Floridians are well aware of the causes of these crises, and are rightfully outraged.

Citizens groups are pushing for sewage fixes around the state, because nutrient pollution from septic tanks and stormwater runoff are problems. That’s something our team realized as we researched our award-winning documentary, St Pete Unfiltered. St Petersburg’s sewage treatment system failures, which cause millions of gallons of raw sewage spills annually, are problems shared by many Florida wastewater agencies. Our city failed to address — even covered up — the weaknesses of our sewage infrastructure and its regular enormous spills. I sincerely hope that elected officials in other Florida cities and counties will spare their citizens the pitched battles we’ve endured against the officials we mistakenly trusted with our health, natural resources and economy. As Floridians, we need to admit our problems and work together toward the ways and means to remedy them.

Sure, modernizing sewage treatment is expensive, but ask St. Pete if hiding from the issue actually saves money. On Oct. 4, after a protracted battle against its own residents to evade its sewage treatment responsibilities, the city of St. Petersburg finally surrendered to court-ordered state and federal oversight.

The settlement places the city’s public works under the watch of the Florida Department of Environmental Protection, and federal Judge Anthony E. Porcelli of the 11th Circuit Middle District Tampa. Meanwhile, even as St Pete enters this agreement, area beaches are still closing due to high human fecal bacteria counts. According to many scientists, nutrients from sewage pollution can fuel the harmful algal blooms presently damaging both coasts. Under court supervision, the city must make upgrades on existing infrastructure, increase treatment capacity, and meet deadlines on the prescribed timeline — hopefully before St. Pete loses its stature as a world-class place to live and visit.

The city jeopardized our local tourism-based economy by wasting three years spending millions of dollars litigating against a five-year project that will amount to over $300 million in infrastructure fixes. The city endangered our economy knowing full well that there are affordable ways to finance new domestic wastewater infrastructures, including advanced treatment options that allow municipalities to clean and recycle the world’s most precious substance: water. Wisely, Article 7 of Florida’s Constitution explicitly authorizes local governments and the state to issue bonds for capital improvements, including wastewater management.

It is time for state and local elected officials to develop comprehensive wastewater treatment strategies that implement the highest standards of treatment possible. If you don’t, the people will hold you accountable, as we did in St. Pete.