Skip to content
Previous Next
Saving our surf from sewage pollution

Many “surf journalists,” me included, point out the central tension of hurricane season for dedicated wave riders. We look forward to it with great anticipation, and in light of climate change, with greater trepidation.

The tropical cyclones that typically generate the year’s best surf are increasingly destructive forces that may wreak havoc on our communities. While images of physical damage capture the public attention, storms often pose invisible threats to public health, threats to which our subculture is particularly vulnerable. 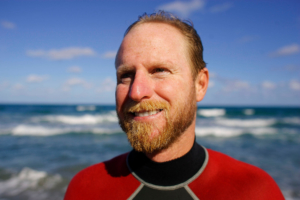 We spend more time in coastal waters than most folks, so we are routinely subjected to “beach closures” when heavy rain events overwhelm urban sewage systems and send fecal indicator bacteria to coastal waters.  We call this disgusting phenomenon, “the flush.”

As a result of the overwhelming influences of climate change, sewage dumping and leak from aging infrastructure are increasingly frequent.

Flooding from heavier rain events—often combining with higher-than-normal tides and storm surge—cause “inflow and infiltration” of stormwater in and out of pipes that carry wastewater to treatment plants. Excess stormwater overwhelms the wastewater plants with too much influent, forcing managers to dump a filthy combination of wastewater and stormwater into the storm drains through manholes and other weak points. That’s exactly what just happened in Bay County.

Power outages also shut down lift stations, which are used to pump wastewater from lower to higher elevations when the gradient can’t allow gravity to send the water toward the treatment plant. Without power, the sewage backs up in the streets.

The “flush” effect is preventable — if the necessary investments are made toward resilient local water and wastewater infrastructure. Indeed, we must prioritize wastewater improvements in climate resilience planning and implementation. Our systems must be water-tight, capable of treating sewage to advanced levels, and able to handle increasing volumes due to predicted population increases. Backup power sources should be standard.

The Clean Waterways Act requires utility owners to develop and implement a master wastewater/stormwater improvement plan that includes how they will pay for repairs and upgrades. It’s hoped that the Florida Department of Environmental Protection (FDEP) will now promulgate rules that require wastewater utility owners to strive for complete resilience against flooding from climate-driven events that will only get worse.

Even following storm events, FDEP should not grant exemptions to the significant fines for spills authorized by the Environmental Accountability Act unless the utility can demonstrate major headway toward wastewater resilience. The fines, and the offer of assistance through a new fund for wastewater improvements, are good stick-and-carrot policy. The Clean Waterways Act includes a specific funding source for master collection/treatment improvements, septic-to-sewer conversions, and onsite advanced treatment systems. Utilities with well-designed, fiscally responsible plans will get funded first.

America’s coastal residents and visitors deserve better than to be kept out of the water by signs warning of high bacteria levels, forced to swim in their community’s own sewage effluent, or live with long-lasting, sewage-fueled harmful algal blooms. We need a nationwide sense of urgency about sewage pollution and water security.

Our organization advocates for aggressive action on local, state and federal levels. In addition to promoting Florida’s new laws as helpful state models, we suggest that Congress should authorize a major COVID stimulus package that includes ample funding for water infrastructure. Moreover, Congress should get to work on a carbon pricing bill that aggressively reduces greenhouse gases while providing a new source of funding for resilience projects as imperative as wastewater resilience.

Terry Gibson is the Government Affairs Director of the American Water Security Project. He is the former East Coast and Environmental Editor of Surfer Magazine, and a longtime contributor to several regional, national and international surfing publications. Terry is based in Jensen Beach.